Kevin Has Left Words & Beyond for Other Opportunities

Two weeks ago tomorrow, Kevin, our rescue Australian Shepherd, our VP of Security and Cuteness took his final walk over the Rainbow Bridge. We are still trying to recover.

Kevin was about 18 months old when my son Jeff and I first met him at an adoption event run by the ASPCA at PetSmart. We went there still mourning our first rescue dog, Laddie, who had died six weeks earlier. Laddie, a Border Collie, was by far the smartest one in the family, and I thought it might be a good thing to have a furry companion who would be a little less challenging. I hoped to find a Toto-like dog. One that was about 10 lbs. and abnormally quiet.

We had no sooner sat down at PetSmart, where the adoptees were, when Kevin trotted over to see us. I immediately realized that he just wouldn’t do. He was at least 30 lbs., very furry, very loud, and he did tricks. Jeff, however, fell in love. “He’s the one Mom!” “No,” I declared. “He’s too big and hairy. And even if he does sit up like a circus bear, we’re not adopting him.”

In the end, we went home without a dog but with high hopes that the second day of the event would produce an acceptable adoptee. No such luck. Again on Sunday no Toto-like dogs appeared from the ASPCA display. Kevin, however, bounced over to us as if he had known us for years. He even chased a couple of other dogs away from us, as if to say, “I saw them first.” Jeff was overjoyed that he remembered us, and Kevin did his bear thing to show me he was the cutest dog in the store. But I was not so easily won over. Once again we left dogless.

The next day my husband, Doug and I decided to go to the animal shelter to see if there were any Toto-like dogs there that they had somehow neglected to bring to the adoption fair. Sure enough, we found two great candidates! Both were small, cuddly, and adorable. But both were waiting the results of various tests before they could be put up for adoption.

As we were leaving, Doug spotted Kevin alone in a cage and looking very glum. He had heard about him from Jeff and spotted him almost immediately. Kev looked so down even I felt sorry for him, and we decided to take him out for a few minutes. The attendant warned us that Kevin didn’t like other dogs and to keep him away from them. But he was so focused on us he didn’t seem to notice anything else. We took him outside on the grass behind the shelter and he hopped up on Doug like they were boon companions. Then he looked at me, did the circus bear thing, sitting on his hind legs with his paws in the air and a big smile on his face. Doug looked at me and I shrugged and said, “Okay. God has shown us this animal three days running I guess he’s ours – all 35 lbs. of him.” And that’s how Kevin became the fourth member of our family.

When we started Words & Beyond Kevin made it clear that our office was his as well.  He kept us company during conferences, writing sessions and Zoom calls. When we were recording Zoom podcasts and video shows, Kevin got his own credit since he somehow was always in the picture.  (Of course, this was only right since he was easily the most photogenic member of the cast.)

Someday we may adopt another dog. (I’m still favoring a Toto lookalike who won’t shed.) But there will always be a place in our hearts that is forever Kevin’s. And Laddie’s.  That’s the way it is with rescues. Somehow they make themselves a part of your life – even after they’ve moved on to the Great Beyond.

May God bless them – every one. 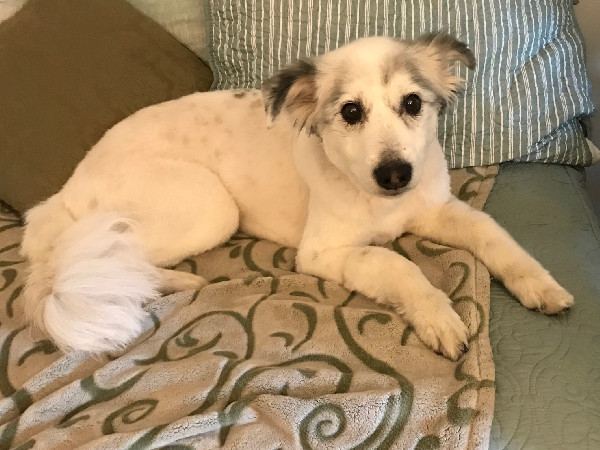